Distributed Locking with Redis and Ruby

It can happen: sometimes you need to severely curtail access to a resource. Maybe you use a 3rd party API where you can only make one call at a time. To handle this extreme case, you need an extreme tool: a distributed lock.

Distributed locks are dangerous: hold the lock for too long and your system throughput plummets. They can easy become a major chokepoint for your app’s performance and scalability.

Recently a blog post talked about using Redis for distributed locking with Sidekiq. I tried the code and it didn’t even work. It did however give me the idea to test Sidekiq Enterprise’s Rate Limiting API, which provides a flexible “concurrent” limiter, against other rubygems which provide a similar lock.

Please Note: I’m not talking about Redlock and other algorithms that provide fault-tolerant locking via distributed consensus. Those algorithms are slower and much harder to get correct; I would never trust myself to write one (or anyone else that’s not a Computer Science Ph.D). In this post, I’m talking about using a single Redis instance to coordinate many worker processes distributed across many machines. This is sufficiently safe and robust for most businesses.

I tested four different distributed lock gems, including sidekiq-ent. With any of them we can create a distributed lock which ensures our system executes a block of code exclusively, even with dozens of processes. One thing to understand: sidekiq-ent’s Rate Limiting API does not need to run within a Sidekiq process - it can be used in any Ruby process: puma, unicorn, passenger, sidekiq, etc.

The lock has to have a timeout as that’s the only way to recover from a process crash while holding a lock. Libraries “wait” in two different ways: redis-semaphore and sidekiq-ent block, efficiently waiting to be notified when they can take the lock, the other two gems poll regularly, forcing an unfortunate tradeoff: polling more often means slamming Redis with unnecessary work.

I created a benchmark exercising all four APIs. The code executes 100 “jobs” using 25 threads. Each job sleeps for 0.1 sec while holding the lock, meaning that a perfect run will take 10.0 sec. Gist of the actual benchmark code here.

The third column shows you the number of seconds actually running on the CPU; sidekiq-ent’s limiter used 0.21 seconds of CPU time, the others varied from 0.3 to 1.0 seconds.

The theoretical perfect runtime is 10 sec, 100 jobs * 0.1 sec sleep so sidekiq-ent adds about 4% overhead. The latter two gems added notably more overhead. Note in the gist, I had to modify pmckee11-redis-lock to disable exponential backoff, otherwise it would die with a timeout after several minutes.

Unfortunately the other three libraries give you no insight into actual lock usage while sidekiq-ent’s concurrent limiter offers real-time metrics so you can understand how the lock is performing – it can answer questions like:

You can read the metric definitions in the wiki. Here’s the UI: 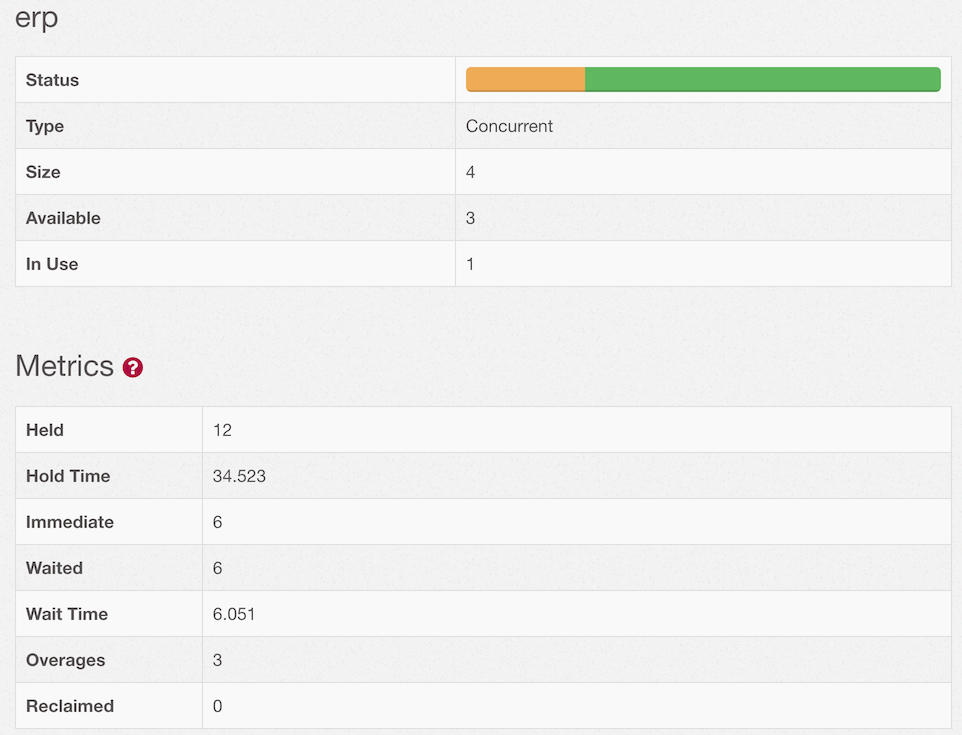 What have we learned?

The other libraries give you the basics of a distributed lock but two are lacking in performance and all are missing the metrics necessary to debug problems. Some good things about Sidekiq Enterprise’s concurrent limiter:

If you are using Sidekiq today, the Enterprise upgrade will drop right in. Sidekiq Enterprise starts at $179/mo, get a quote in seconds here.